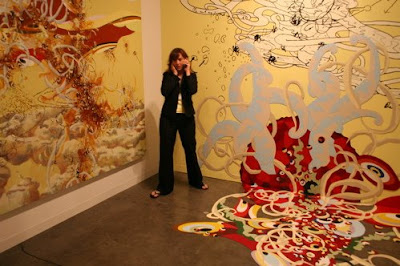 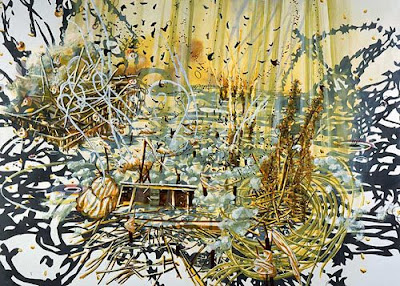 I first stumbled upon Matthew Ritchie's work at the Sydney Biennale in 2002. I remember walking into this room that had undulating lines and shapes which looked like they were exploding. They were painted with vibrant colors both on the walls and on the floor. I had never seen anything like it, but I knew I needed to see more. This man had created something more like my own visions than I ever had. (Which of course made me jealous that I had not created it myself.)

I aspire to a similar visual aesthetic, but I could never involve the level of reason and meaning that he infuses into his work. In fact, when I start to read about the ideas behind his work my head starts to hurt. I love that aspect of his work, but it is not the reason I love his work. It is the superficial aesthetic that draws me to a certain artist's work. Just to give you a taste of what his work is about I will insert a quote I found online:

"Matthew Ritchie’s artistic mission has been no less ambitious than an attempt to represent the entire universe and the structures of knowledge and belief that we use to understand and visualize it. Ritchie’s encyclopedic project (continually expanding and evolving like the universe itself) stems from his imagination, and is cataloged in a conceptual chart replete with allusions drawn from Judeo-Christian religion, occult practices, Gnostic traditions, and scientific elements and principles."
Posted by blueeyedfreckle at 10:18 AM Pin It