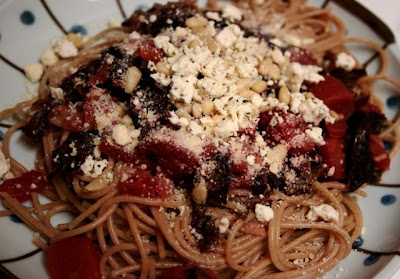 After a few months of looking for a CSA, I finally found one thanks to a friend. Now, every week I go and pick up a large brown bag full of beautiful organic fruits and vegetables straight from some local-ish farm. I love it. Sometimes, in that bag there is something I've never tried.  I love this aspect, because I use it as an excuse to try new recipes! A couple weeks ago it contained swiss chard. I had seen it at the grocery store before, but had never bought any, so I had to scour the internet in search of a good recipe. Luckily I found one, and Franc and I both thought it was delish. (pictured above) Swiss Chard is red, and gets deeper in color as it cooks. So, this was definitely the most colorful pasta I had ever consumed! The recipe is below taken from The Food Network/ Giada as the cook

Posted by blueeyedfreckle at 7:28 PM Pin It

Email ThisBlogThis!Share to TwitterShare to FacebookShare to Pinterest
Labels: my house

Isn't it so great. Ours comes straight to my door and I get in every other Wed. Except I really tired of Kale and Swiss chard....I can't wait for the summer fruit! Your dish looks delicious!

that looks yummy. are you in utah? i have been trying to get the bountiful baskets every week and they sell out in minutes. i really would love to find one.

I LOVE swiss chard! I buy it at the farmers' market regularly and eat it lots of different ways. Most recently I cooked sauteed it with cranberries and pine nuts and ate it over couscous (cooked with veg stock)--so delicious!

wait, what is this? you have to explain it o me!zxxz (that last bit is from hugh)

(he forgot to say that too)

mmmm. claire that sounds so yummy!

I dreamed about this post last night. It included a whole conversation with my husband about Swiss chard. Haha