I like to sew for myself, but lately I haven't had much of a chance because I have been swamped with headband orders. The other day it occurred to me that many of the clothes I have made for myself have never been photographed, and most were from the pre-blogging days.  So here you can see some "vintage" (as in older than now) Katie/blueeyedfreckle creations! I am thinking this will be a series, because I have LOTS and no one wants a 3 page post:) In this post I am going to give you the thoughts I had while creating each piece and where my inspiration came from.

oh and forgive my bad modeling. I seemed to think that hands on the hips is good modeling. 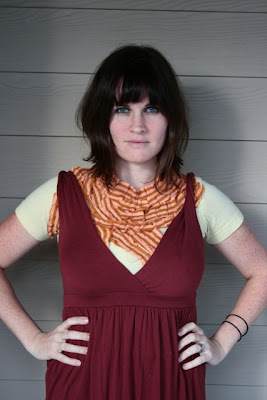 circa 2004
This shirt was one of the first things I ever ruffled up. I had this brilliant idea while I was working at Anthro. ( obviously everyone is doing this to their shirts these days, but at the time I had never seen anything like it, except for the things at anthro). It is still one of my very favorite things to wear. 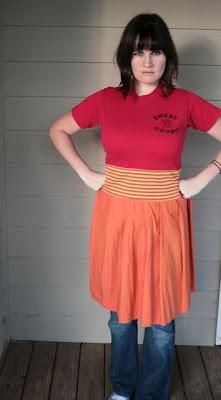 circa 2005.
I swear this dress looks better on me when my *you know whats* aren't so big from nursing!! Its a simple dress though, made back when I was just figuring out how to sew myself a dress. I had that red little boys soccer t-shirt that I loved but it was just way too short. And I didn't know how to construct tops of dresses, so I had this idea to just take the shirt and add things to the bottom. Yes, you are saying that you've seen this a million times. But since this was pre-blog world (for me), I hadn't ever seen the idea. Oh the fun I would have had in those days if I had had millions of crafty blogs to peruse. 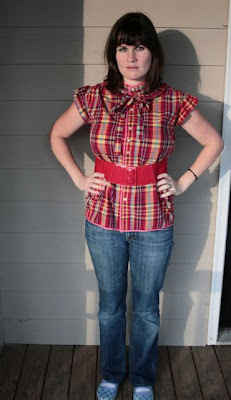 circa 2009.
Okay so this isn't that old, but I've never documented it. When I first had Olivia,  I needed things to wear that had easy nursing-access. I couldn't fit into my other button-down shirts, so I  went to Goodwill and bought some men's shirts.   (I had been inspired by the shirts LeAnn wore while she was on project runway). I  cut the sleeves off and made flutter sleeves, and then constructed a different type of collar. I added piping to the collar, placket and bottom hemline, then added darts for better fit. 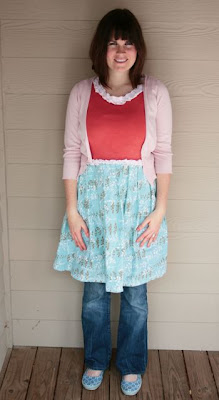 circa 2009.
This was a dress I made while I was pregnant. I dyed a white hanes t-shirt and  then added ruffles and a bottom to make it a dress. 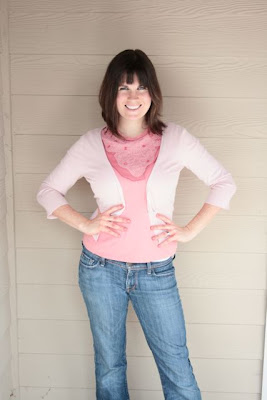 circa 2004 .
This was just part of one shirt (the bib) that I sewed to another because the other shirt had shrunk too much. 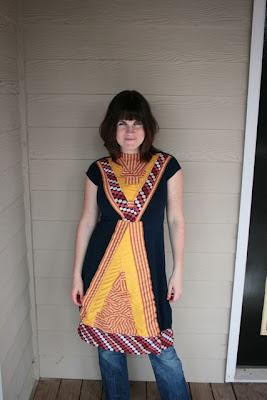 circa 2007.
this was one of the first dresses I designed and constructed completely from scratch AND it actually looked okay! I made it while watching project runway, which always inspires me to sew. 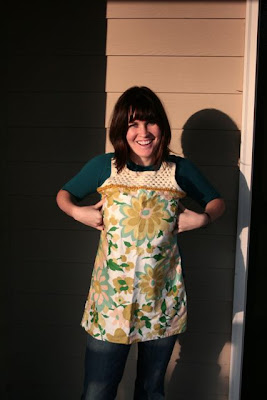 circa 2005.
HA! I can't even put this one on right now.... When I lived in Utah I had this idea to take sweaters and then add a bottom of fabric to make it a dress (just like the t-shirt idea). The ones after this had more sweater, but this was my first. I took the top of a 70's sweater dress and cut it off, added a crocheted trim, and then sewed a  tube with darts to finish it up. I am still in love with this, and hope that one day I can fit into it again!!!!

** I don't know why I looked mad in all these shots... sometimes I get agitated with the photographer (my husband) if I look fat. As if he can help it:)
Posted by blueeyedfreckle at 7:20 AM Pin It

They're AMAZING! You are so multi talented!

I love love love that last dress you unfortunately can't fit into! I am adding "stop at thrift store" to my list of things to do today.

I may shamelessly copy that idea. I hope you don't mind? I'll definitely link back to you if I ever get it done, which is a crapshoot these days.

Loving the pick bib shirt. It is so cute.

That dress you made from scratch is killer!

(and I'm glad I'm not the only one who can't adjust to my nursing bozongas. Yeesh!)

Awesome!! It's too fun cutting stuff up and creating something new. :-) If you don't already know, pink is an amazing color on you. (and I love that shirt!)

you CRACK me up katie!

cute, I LOVE YOUR HAIR...nice knockers.

I love all of these! Plus, you are gorgeous! Plus, seriously, you did all of these pre-blog world? That is impressive.

whoa! great job, girl! I love the idea of re-working old, shrunken, or holey stuff into something new and awesome! ...been meaning to try and tackle some myself (i've never actually sewn clothes before...) and you've inspired me to just DO IT!

katie! you look fabulous. i hope i can get in that kind of shape someday (now that baby is out, i have no excuse for my largess). the bib short pic especially.

anyway, i remember you wearing the crochet-top sweaterdress to my bridal shower and i have wanted to create one (or just steal yours) ever since. if you ever want it to go to a loving home, send it my way. otherwise, i will keep trying to figure out how to make my own. :)

okay, i just found your blog and i am trying that men's shirt thing TODAY. i am 21 weeks pregnant and already too busty for anything at the stores. argh! thanks for saving me. :)

At least your husband will photo you. Mine makes me use the tri-pod. :)
So then I have to set the timer then run and get ready then run back to check the camera and see if it was actually pointing at me then I have to go through those steps again to retake it because it cut my arm off or something...

You're pretty creative with your wardrobe, love it!