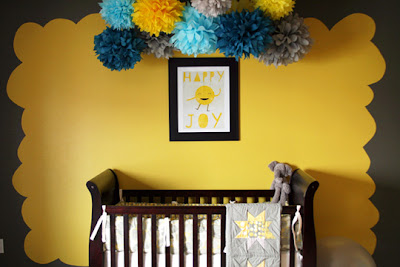 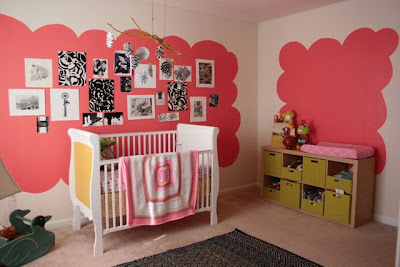 Remember when I was in the Ohdeedoh contest? Well today on Ohdeedoh there was a room tour (my friend sent me the link after seeing it), and low and behold there were scalloped walls just like mine AND the same crib ( but i painted mine)!!!  I like the way they used grey and yellow, its a nice variation. Too bad the lady doesn't mention being inspired by anyone... who knows, maybe she never looked at that contest (even though its on the same website), and she just came up with the same idea! It definitely happens to me sometimes.

I hope it was a coincidence.
I teach at an art school and sometimes you come up with a rockin idea and someone else has too. lol
Sometimes though, people just dont like to give someone else credit for inspiration, its too bad.

i think i invented stuff all the time...
then i realize it's been done before...and i'm just not in the loop

they are both cute though!

Your room it so cute! The scallops are great - very chic.

unfortunately people can be kind of stingy with sharing their "inspiration." i could tell you some stories, but i won't b/c i don't want to seem bitter (if you know what i mean). either way, the nurseries are adorable and i'd take it as a compliment that you've inspired someone to do something similar. have a great weekend.

these rooms are amazin! I love the pom poms on the first room! And dont feel bad hey.. everythings been done before... it would be lovely if you had been noted as inspiration but some people either cant remember or just dont want to share! I always forget sources of inspiration but i always ask if someone knows or has seen it before so I can link back to the original source! Just to be nice :)
Claire xo

Love it! I get excited every time you post something! Eye candy

It is nice to be a source of inspiration! I love the decor in your room and ideas!

I've been inspired to make those pom poms for Mia's room!

I love the way you painted the crib. Such a pretty combination of colors.

seriously, your room is so cool. And I totally liked what you said about being inspired by something and then forgetting where you saw it and doing a similar thing down the road. That totally happens to me. But I'm glad she gave credit to you. I try my best to do that too.